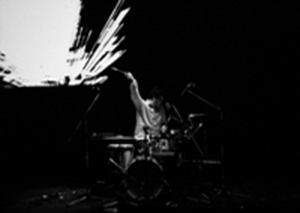 Laplace Tiger (2009) 12". For drum kit, arm-sensors, live-electronics and live-video.The use of sensors at the forearm of the player allows the complete control of the live electronics and the structuring of the piece. Furthermore the player's movement is the exclusive material for the live video.Based on these technical possibilities I tried to realize a piece that works like a huge convolution. The acoustically played material is temporarily shifted, processed and then interweaved through the motions of the performer. Apart from this sound synthesis is playable with the sensors to extend the musical language of the drum set. But the idea is that both the processed sounds and the additional elements are all controllable by and hence linked to the movement of the player - focusing the generation of sound as much on the physical presence of the player as possible. The pyramiding of sound shreds, live-electronics and the percussion itself aims at a highly condensed performance somewhere between contemporary classical music and electronica.The title of the piece is inspired by the "laplace demon" - a thought experiment describing a model using total determination. This is to evoke the question of how a system of this complexity is totally reproducible - which it is not in this case. The concept of the piece is a very structured progression of about 100 scenes, which are clearly defined - but within these cells there is a great amount of freedom for the performer on a micro level. This allows the interpreter to react to and play with the fine details and nuances arising from slight gestures and to have the freedom to develop the interlacing between the acoustic drumming and the folded, temporarily shifted processing.
Project Links
http://www.alexanderschubert.net/works/laplace_tiger.php
Project #